VALIDATION OF FERROL AND CALASPARRA PILOTS 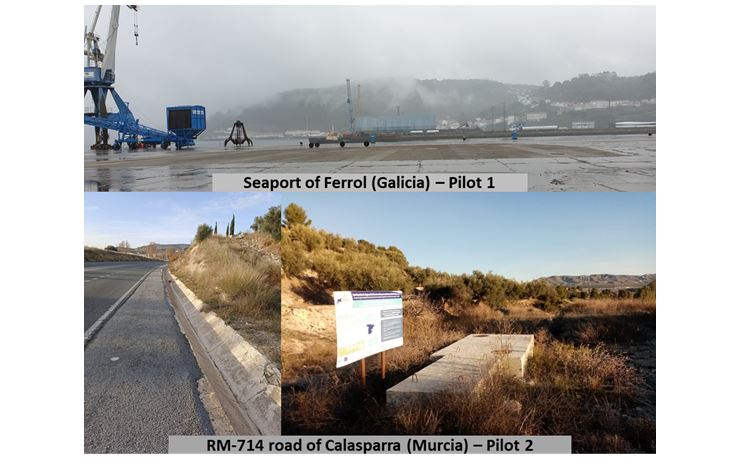 The action of validation of LIFE DrainRain pilots will be completed this September. Over this validation, the performance of the pilot 1, located in Ferrol seaport (Galicia), has been evaluated for more than 25 months of operation between September 2019 and June 2022. The performance of pilot 2, located in RM-714 road of Calasparra (Murcia), has been evaluated after 21 months of operation (between December 2020 until September 2022).

In order to determine the performance of each pilot as well as its treatment units, samples have been taken periodically in rainy periods, both before and after the whole treatment as well as between the different treatment units. Moreover, the stored treated water has been analysed in both rainy and drought conditions.

As expected, the removal performances of the pollutants were quite different between both pilots, mainly due to the contaminants contained in runoff water (influenced by the activities in the vicinity of each pilot area) and the different climatological conditions of each pilot area. Even though these differences, similar ranges of removals have been found in both pilots.

In addition, the results obtained in both pilots have been reviewed according to Spanish Royal Decree 1620/2007 and Regulation (EU) 2020/741 which stablished the minimum requirements for water reuse. The data obtained over the validation period determined the feasibility of the LIFE DrainRain treated water for urban uses (street cleaning, green areas irrigation, etc.) in Ferrol and agricultural uses (crop irrigation) in Calasparra.

This website uses cookies to improve your experience while you navigate through the website. Out of these, the cookies that are categorized as necessary are stored on your browser as they are essential for the working of basic functionalities of the website. We also use third-party cookies that help us analyze and understand how you use this website. These cookies will be stored in your browser only with your consent. You also have the option to opt-out of these cookies. But opting out of some of these cookies may affect your browsing experience.
Necessary Always Enabled
Necessary cookies are absolutely essential for the website to function properly. This category only includes cookies that ensures basic functionalities and security features of the website. These cookies do not store any personal information.
Non-necessary
Any cookies that may not be particularly necessary for the website to function and is used specifically to collect user personal data via analytics, ads, other embedded contents are termed as non-necessary cookies. It is mandatory to procure user consent prior to running these cookies on your website.
SAVE & ACCEPT
Scroll